In the context of ShapeChange, an XMI 1.0 file representing an application schema can be exported from Rational Rose or Enterprise Architect, and serve as an input into ShapeChange. This page describes the considerations for this input option.

To be valid input into the mapping process, an XMI 1.0 representation of an AS-in-UML must conform to the following:

Within the XMI file, only the contents of the <XMI.header> and the <XMI.content> elements are read by ShapeChange.  All other elements, including tool-specific extensions, will be ignored.

XMI 1.0 files for use with ShapeChange may be generated either using IBM’s Rational Rose, or Enterprise Architect.  This section describes the processes by which an AS-in-UML may be exported as XMI from either of these tools.

This screenshot depicts the export options that must be chosen when exporting an XMI 1.0 file for use with ShapeChange: 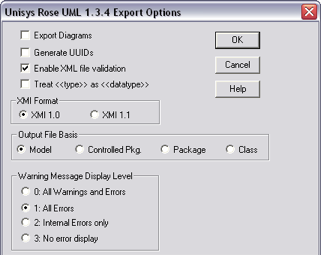 Enterprise Architect also allows for export of UML models to XMI 1.0 format.  This dialog shows the EA “Export Package to XMI” dialog, where the “Other XML Formats” “Publish” button has to be clicked.

This opens the following dialog where the options must be selected as shown: 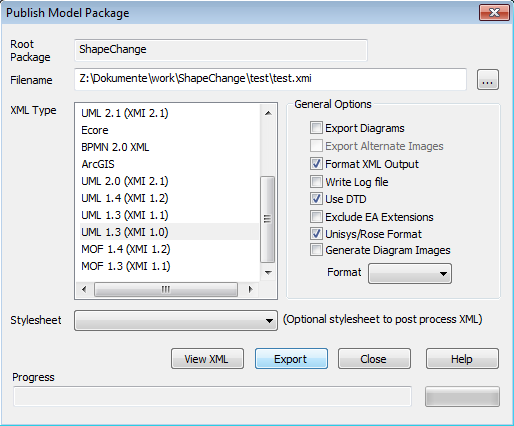 Several issues have been observed in ShapeChange output when starting from an XMI 1.0 model generated using the Rational Rose Unisys XMI Plugin:

It is not known if these same issues occur in XMI 1.0 files exported from Enterprise Architect.

For these reasons, the Rose-Unisys-XMI 1.0 input option is considered deprecated and should not be used, if there is an alternative available.